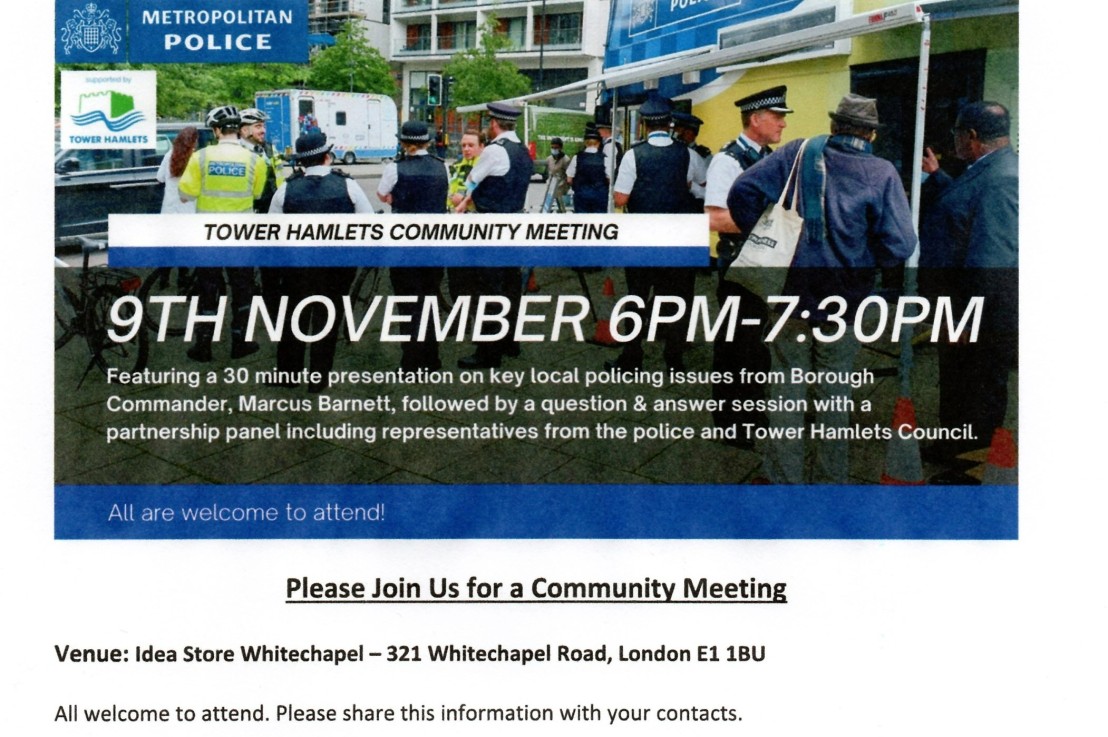 We heard that people sometimes think their crime reports do not get actioned.

Another questioned asked whether Crimestoppers reports get priority. This was answered with: “

” In regards to reports Crimestoppers; All information we receive is risk assessed and graded so we can provide a suitable response. All sources are treated equally.”

Hence anonymous reports received via our local reporting page, get fed into the system alongside all other reports.

The Ward panels were mentioned as important community tool when ascertaining 2 out of 3 police priorities. It cannot be said often enough that systematic engagement with Neighbourhood Watch groups, enables strong continued and consistent community relationships with the police and other partners, who work together with the Tower Hamlets Partnership.

Violence against Women and Girls has four sections:

Commander Barnett apologised profusely for the conduct of a former police officer who was sentenced for the brutal murder of a woman. By enlarge, he said the police is a superb organisation, which can be relied upon. Whilst Commander Barnett assured us that a culture change in the police is necessary, we saw a whole male line-up, the Neighbourhood Watch representative, which was female, was not allowed to speak.

The Police do not agree that LTN schemes stop them from attending duty.

We feel that local Neighbourhood Watch groups can provide the necessary support to support locals who need it about reporting and working together with police.

Neighbourhood Watch embraces all new technologies and face to face methods. Neighbourhood Watch groups also enable local people to meet on demand and more often than the ward panels who often only meet every 3-4 months. Peer to peer meetings with neighbours are important.

Residents are experiencing problems with pavements and paths being blocked by abandoned e-bikes and scooters. These are particularly hazardous for the elderly, infirm, wheelchair users and parents with prams. This is what Dr Farrelly from the Wapping Group Practice had to say: “Dr Farrelly senior partner at Wapping Group Practice recognises that the hire bicycles that are abandoned on Wapping streets pose a hazard to our […]

London Borough of Tower Hamlets, Violence against Women & Girls (VAWG) & Hate Crime (HC) Team will be holding a conference on ‘Bringing Perpetrators to Justice’ on Thursday 1st December 2022 from 1 – 4pm. This event will be at Raines House,  Raine St, London E1W 3AU.  This will be a public event and participants […]